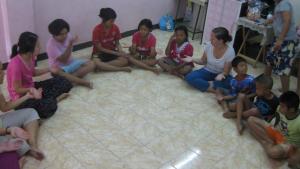 The journey is just beginning here in Khlong Toey and it has been a short yet busy 6 (in Thai = "hok") days. Let's start with the senses. First, stepping off the bus, you look around and see many run-down shops, numerous motor bikes, and endless street vendors. When it comes to smell, it's a combination of street food and sewer. It is easy to get used to, yet hard to get over. That is what our community lives with, and there is no way to get away. I actually had to start using my inhaler because the air is so thick with stuff.

Getting off the bus was a shock, yet not the biggest. One of the most difficult moments for me while being there was seeing how we were directly next to big city buildings, yet for some reason it felt like there was no way out. God was really showing how much this community experiences simply just being where they are. We went to meet our host moms, Pi Naan and Pi On. Crystal and Naomi are living with Pi Naan, a young 25 year old mom with two children. She now works for Hang On, a company that hires women in the community to make hangers. Both of Pi Naan’s parents left her when she was young, but her grandma stayed around and helps her substantially. That house, the size of someone's living room in the U.S., contains 8 people including our team. Pi Naan was just moving in the same day that our team arrived! She had just moved and upgraded her house.

We then went to Pi On's house where Rebekah and I are staying. It is about the size of Pi Naan's house, but two stories. Pi On is a wonderful mother of two boys who is in her early 30s. In that house, Pi On lives with her boys, her two younger sisters, and their families. This house, including us, contains 10 people. We are so blessed to have such caring host moms who work so hard to simply provide for their families.

On our first full day on site, we met as a team at 8 a.m. to get breakfast and go to the preschool. The children range from 2 to 6 years old. There are 4 different teachers, all with such distinctly different personalities. One of them is hilarious and always calls herself "Suay," which means beautiful, because she always wears red lipstick and blue eyeshadow. She tried to sell lipstick to Crysta during one of our lunches. The teachers prepare a lunch every day that we all sit down and eat together, while the children nap. I believe I have seen God consistently in the hope of the youth. They are the up and coming generation of transformation if they simply can experience how they are loved so unconditionally.

After lunch we go to Hang On, which a huge ministry to the people who work for the organization because they are able to work from home. They have built a community of strong women starting with a Christian woman, Khru Muayh, who knows and wants to share how much God loves them. It gives them a sense of worth. We do whatever is needed from us, and so often that is just to be there with a helpful hand and some love, because God is at work. When the day is coming to a close we eat dinner and spend time with our host families, getting to know their lives even though we don't have language. My language has quadrupled in the past week though!

On Sunday we went to church, and it was a small church where, aside from us, there were about 8 people, half of which were high school age and younger. God is starting something there! I believe it all starts with prayer, and they definitely focused on that. We prayed for children, neighbors, Thailand and the government. Prayer is the start of movements. God is starting to do great things, and it seems to start with the children.