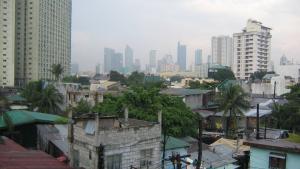 Blacklisted. Yes, you read that correctly. Black. Listed. My teammates and I were blacklisted from the country of our original summer project for six months. Let me explain. We were originally set to go to a completely different country and city and, for an entire semester, that’s where I imagined this summer was set to transpire. Little did I know, God had a more brilliant, and much more scary plan, for my team members and me.

To make a long story short, that country’s government blacklisted eight of our team’s visas, mine included, not giving us any reason for the rejection at all (we would eventually learn it was due to our Christian contact). It was devastating. Everything that we had planned for, prayed for, and dreamed of was crushed after learning of our denial. What were we even to do next? Re-applying for visas would be useless and expensive while going home to a “normal” summer would be our last option. Our staff leader, Emily, tossed up one final possibility: join a Global Urban Trek to Bangkok, Thailand.

This idea, however, had serious implications. First of all, the costs of ticket cancellations, flight changes, and spending a waiting week in Dallas would be extremely costly. We would need to raise an additional $12,000 as a 9-member team. $12,000 in a couple day’s time. Secondly, our trips would be pushed back another week, requiring commitments of even more of our summer.

We exhausted our lists of friends and donors, and hope for raising the funds was slowly dwindling. Then we heard the news. Emily gathered us together. What was her news? Last time she gathered us for a meeting, she told us we were blacklisted from a country - what did she need to tell us now? The air was stifling. It seemed to take hours for Emily to spit out her news.

The moment was euphoric. $10,000. A mystery donor, a person none of us knew at all, had donated $10,000 for some college missionaries to go to Thailand. I’m pretty sure I cried some tears of joy. God is good, and his plan is perfect - much better than what I could’ve ever fathomed.

Two months ago, at this time, I would have never expected to be plopped down in a cozy, warm dining room in the lower south side of Bangkok. In fact, I really would never have foreseen myself in Bangkok at all. But I’m learning that God’s plan is infinitely better, infinitely more brilliant, and brings infinitely more glory to His name than mine ever could. And my Trek has barely even started yet.