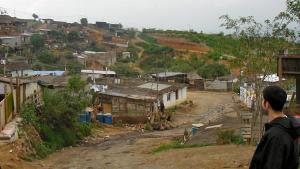 Orientation in Mexico City has been incredible. We are preparing for our ministry sites and engaging in the culture around us. Today, I reflect on the most real simulation of privilege and poverty. The simulation required that we plan and build the best cities possible and work hard.  We divided into four teams: Orange, Pink, Yellow, and Green. Respectively, each team represented: rich upper-class, middle class, lower class, and poverty level communities. (It was undisclosed that each city possessed a predetermined status—just like real privilege!) According to the status of privilege, each team received craft materials; all of us thinking distribution was equal. To complete the simulation, our staff donned the roles of government: Mayor, Secretary, Building Inspector, and Police Officer, each with their own establishments.

I was part of the green team, the city predetermined for poverty and discrimination.  At first we had optimism and vision for our community, but we were thwarted at every turn.  It was impossible to have the inspector approve our plans. The secretary played the roundabout game with us, perpetually denying us access to the Mayor. The worst treatment came from the policeman. He incarcerated my entire team throughout the simulation (and the yellow team). He refused us the right of speech and picked the most superficial charges. We ended up on the jail couch or down in “maximum security.” He intimidated us, silenced us, and “disappeared” us. We were discriminated against simply because we belonged to the green or yellow team.

The pink and orange team received favor from the Mayor. They got candy and all their plans approved; if they performed favors for the government, yellow and green got targeted. Instead of schools, the government forced a jail to be built. Instead of a garden, a city dump. The excuse: “It’s to help you” or “it needs to go somewhere.”

It was infuriating, frustrating, and then crushing. We pushed back, argued, and even worked harder by keeping our heads down. It only ended in jail. I personally felt this increasing sense of desperation. This desperation was bitter with helplessness.  I felt my identity being suppressed and cut down. Our dream plans never manifested and instead the mayor dictated our plans. The upper class colors dismissed our cries.

This was only a simulation, a glimpse of reality. How real though is this desperation? This exercise gave me new eyes. I saw the hammer of oppression and the ways it beats down the poor and un-privileged: you try to speak or stand or resist and you get hammered. Wham! Wham! Wham! This hammer is the semblance of the forces that create, deepen, and exploit poverty for the benefit of the privileged.

While they pushed jails and dumps onto the green team, pink and orange built malls and schools. These forces are real and I am a part of them. This simulation makes me face myself—a middle class, Chinese American college student. I didn’t grow up in the “green” neighborhood, yet I didn’t choose privilege. Privilege chose me, and is an undeniable part of my experience and identity. That’s it—privilege and poverty shape our experiences and those are our identities.

Today, I received the gift of empathy to perceive a fragment of those who suffer unjustly for the benefit of others. I see that desperation leads to either death or despair, and despair hammers down the dignity, dreams, and spirit of a person. Poverty is a hammer that crushes men and women.

“Jesus, I confess that I have left my neighbor by the roadside. Please cure my sin of apathy and ignorance. I ask for your eyes to see my privileged experiences so I may repent and take ownership. I ask for your ears to hear the desperate cries of the oppressed who are cornered and beaten down unjustly. I ask for your feet to stand in solidarity, and your hands that I may act when needed.”

If this is just a simulation, how much more will you show me at our ministry sites?

“Arise, O Lord! Do not let mere mortals defy you!
Judge the nations
Make them tremble in fear, O Lord.
Let the nations know they are merely human.”
Psalm 9:19-20