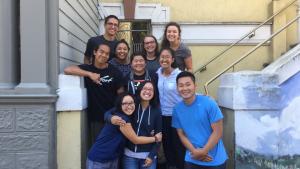 “Do You Hear Their Voices?” This question keeps running through my mind. The first day of orientation we did a simulation and broke up into 4 teams to build the best neighborhood. It didn’t take long for my team “Emerald City” to realize that we were being discriminated against. Our appointments at City Hall kept getting pushed back, the store clerks would not help us and I got arresting for no reason. We were the low income community, we were the poor.

The thing that surprised me the most was how easy if was to stop respecting authority and find ways to get what we needed to build our neighborhood because of the ways the city and the police treated us. They would not give us a building permit so we starting to build anyway, how else would we keep a roof over our heads? The protest that followed seemed necessary to have our voices heard. No one outside of our city understood. No one else saw the injustice. No one heard our voices. The middle-class neighborhood, called “InterVar City,” and students who were a part of that group shared how they had no idea anything was wrong with our neighborhood.  They were so focused on building their area they did not hear us. Even the physical placement of the neighborhoods made it so they could not see our turmoil.

As a white Christian, middle class college student, I had to ask myself, “What neighborhoods do I not see? What voices am I not listening to?” The greatest struggle for me as I head to Manila is choosing to listen to those voices of pain, that cry out because of injustice. I believe it is a choice our whole team has wresteled with. No one is forcing us to go to Manila. No one made us pack up that suitcase and walk on that plane today. And yet, here we are, about to land in Manila. We still have in-country orientation to do. We still don’t know what we’re getting ourselves into but I pray and hope that Christ has a wonderful plan for us. On the first day of orientation, our leader said that this is a gracious invitation from Jesus – one that has our good in mind and the world’s good in mind. He has something to teach all of us.

This week we walked through San Francisco and learned about the voices of Native Americans and we traveled through the Mission District and listened to the voices of our Latino brothers and sisters expressing their pain through art. Even missionaries have caused pain when sharing the gospel and missions was a tool by which different empires colonized. A history that is all too real for the Philippines being colonized by Spain and the US. In one of the readings this week we learned that the Native Americans believed in a grandfather who “draws straight with crooked lines.” I believe that is our God. Despite any pain Christian missionaries or Americans have caused, I pray that He still deaws straight lines with them. And that he will with us.

Our plane is turning and about to touch down on the runway.  It is almost time for us to hop off, explore the city, find some delicious food, and walk with Jesus for the next six weeks.  We hope to see his glory here and in his people and the question remains, “Will we hear their voices?”