Into the Rain (Manila Underground) 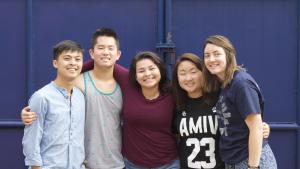 The streets come alive with kids when it rains. Our team was sitting around the table in the living room area when it began to pour rain. We watched as kids flooded to the streets screaming with joy, throwing mud balls at each other. A little boy comes to the front gate (let’s call him “young boy”) to find shelter from the rain. He looks at me. I wave, he waves back and stares, so I stick my tongue out, he does it back then turns to spring into the rain, disappearing down the street. Every part of me wanted to follow him into the rain but wasn’t sure if it was okay with Nanay and Tatay. Ella stands up and moves towards the front gate, motioning to Ef to join her. In my head I was like: “Are Nanay and Tatay going to let them run into the rain?”

The first large typhoon of the season came through this week. For the Filipino people, typhoons bring a lot of fear, but also a stark contrast of joy in the streets of our neighborhood. Typhoons bring floods in the Teresa, Rizal area. Our team joked that we were ready for the floods with our rain boots and swimsuits. On Monday night as I lay in bed, the rain poured down our tin roof. The sounds of the neighborhood muffled by the rain; I heard the distant music from next door, dogs barking on the street, and a baby crying. The thunder came roaring like someone was drumming on the roof; I’ve never heard thunder like it before. Then all of a sudden everything was quiet as the electricity in the neighborhood went out. The humidity came to the forefront of my mind as the fan stopped. It was just the darkness of the storm. My heart pounded as I remembered Ate Laling’s story of how, in some areas as the floods from the rain came, they would be sitting on the roof of their three-story homes, waiting for the water to go down. The floods bring a lot of destruction in their wake as the floods tear through neighborhoods destroying homes, forcing displacement, and destroying livelihoods of the Filipino people.

Ella sprinted out into the rain with Ef right behind her. Jesse looked at us then turned and ran into the rain without hesitation. In seconds, our whole team was out the door soaked by the rain. The kids multiplied in the streets as we followed Ella to the end of the street. Ate Laling and Nanay came out with their umbrellas and raincoats, Ate laughing that Roy brought the tabo with him. We moved to the center of the traffic/grass circle. As I looked around and felt the rain wash over me I felt God’s presence, He was sharing in the joy of this moment. I saw the young boy in a puddle splashing and washing himself in the rain.

In 2 Kings 5:1-14, Naaman a “great man” who had leprosy was sent to Israel (enemy land) to be healed. Elisha, a prophet, came and told him that he was to wash himself in the Jordan river seven times and he would be healed of his leprosy. This angered Naaman because he expected immediate healing by a large act of God, not in the Jordan Rivers, which he viewed as less than the rivers of Damascus. So, he left in rage, but his servant came to him again and said, “If the prophet has told you to do some great thing, would you not have done it? How much more than when he tells you, ‘wash and be cleansed.’” So Naaman went and did as the prophet had told him and his flesh was restored to that of a young boy. As the young boy sat in the puddle washing himself, I saw the face of Naaman in him. In this small moment, God’s voice spoke clearer than any. In the midst of the darkness of poverty and systemic injustices that surrounded the young boy, Jesus was washing this boy clean, only through Jesus could the young be free of the brokenness of the world. For my team and myself, this resonates on a deeper level. For Roy, he has been learning new ways of how God works. His idea of how God brings healing is expanding here in the Philippines.

For Naaman, his self-informed expectations of how God was going to work almost made him miss out on experiencing God in deep healing. God came and showed Naaman that in places and with people he could not see God work through, He did. Through marginalized people, God gave Naaman new eyes for healing and deeper truths. In the same way, our team has learned to not let our self-informed expectations of how God works, get in the way of seeing God move here in the Philippines. Can we see God working even in the mundane everyday of a young boy washing in a puddle? Will we be open to see and experience healing here in the Philippines in new ways?