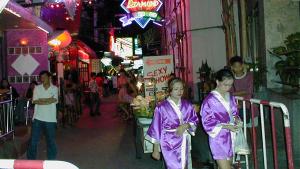 “Sabai Sabai” is the motto here in Thailand. Directly translated it means “chill chill.” Basically, “sabai sabai” is an all purpose phrase synonymous with “It’s all good!” For example, if you’re running a little late, it’s “sabai sabai” – no big deal. This past week, our team encountered injustices here in Bangkok at which Thai culture shrugs its shoulders and says, “Sabai sabai.” But, our hearts break and we want to see change.

We visited the Red Light District this week. As we walked through the 3-story building called Nana Plaza, we were shocked and disturbed at the desire for sex that was shared before our eyes. One walk through was enough, but there’s no avoiding the reality that this bustling bar scene is the destination for 7 out of 10 foreign men and where 5,000-6,000 women and lady boys sell themselves to provide for their families. We also visited a new face this week. She is a 72-year-old Cambodian woman we call Yai (Yai means Grandma). She is paralyzed for the most part and spends her days lying on the floor, watching TV, alone, because her daughter works all day. We visit Yai once a day to bathe and feed her, which is difficult because she is in pain. Her mind is clear, but her body is failing. It is when we visit Yai and see the loneliness and pain of her condition that we are reminded that this is also the reality of many disabled elderly in Khlong Toey. The Red Light District and Yai’s condition are just 2 of many overlooked realities here in Bangkok that are shoved under the rug of “Sabai Sabai.”

But it is easy to point fingers as an outsider. Upon reflection of this past week, we’ve realized that the rest of the world, including our own America, have their own injustices that we “Sabai Sabai” to. We are unwilling to cast down our own idols of money, sex and power. These idols fuel the cycles of poverty that we’ve been introduced to during this trip. This week has been eye-opening and convicting.

Guest written by Crystal and Naomi