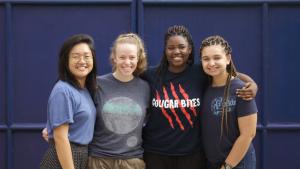 In John 4, Jesus strategically places Himself in a place forbidden from Jews just to have an encounter with a Samaritan woman. On His way from Judea, heading towards Galilee, Jesus makes a pit stop at a well where He finds a woman fetching water, a task which is at first glance so ordinary, except for the fact that it was midday. Most people gathered around the well at evening because the heat of the day is unbearable. So, what was this woman doing? She was escaping crowds of people who would mock and scorn her for the many men she had been with. Seeing Jesus at the well was a surprise, especially since He was a Jew. Although this Samaritan woman, in an ordinary task, wasn’t expecting to see Jesus, He met her.

During my time in the Philippines, I have had the pleasure of serving with a ministry which reaches women similar to the Samaritan woman. Samaritana Transformation Ministries (STM) reaches upstream and downstream women in the river, or culture, of prostitution; those who currently work as prostitutes and those at risk. The Samaritan woman whom Jesus met was labeled unclean by most, if not all, the people in her town and as a result, she isolated herself out of fear of being rejected. I only imagine how desperately this woman change, just how and where would she start? Many of the women STM reaches are similar to the Samaritan woman; they are social rejects because of the men they have belonged to and they want change in their life but are unaware of where to start. I admire Samaritana’s ministry approach; they go to women on the streets and meet them where they are. Like Jesus did, they enter in without judgment and full of love. These women understand the struggle of those they minister to because they once lived the life of those they strive to love well.

One night during outreach, I tagged along with Samaritana’s team while we trekked our way to a popular place where women in prostitution work. It was about 9 PM by the time we arrived, many hugs and conversations followed shortly thereafter. Samaritana’s team has been intentional in creating and maintaining relationships with these women by making visits once a week for years now. I loved being able to witness relationship between these women and even being given a moment of time to share with them. Roughly 30 minutes after sweet conversations, we all huddled our way to a staircase outside a clothes store where we sat in solidarity with one another, enjoying an ordinary moment of fellowship. Unexpectedly, I was asked to share a Bible verse with the women, so I proceeded to read aloud Psalm 46:1, 5 to the best of my ability in Tagalog, the Filipino language. The women and children around began to speak about what this meant to them and where they see Jesus in their lives.

I appreciate how consistent Jesus is, the same yesterday, today, and tomorrow. In this mundane moment, Jesus met us. He met us outside, sitting on the staircase in the rain where women, victims of prostitution, were being picked up by their clients. It was a beautiful moment of clarity and truth: the Bible was actually true when it said prostitutes will enter the Kingdom of God. I think it is my naivete that led me to believe that these women didn’t know Jesus because of their means of providing for their family. However, as one of the women shared, “God is the One keeping me safe through this all.” I saw how Jesus was allowing His Kingdom to break through in this space. On a street corner being used for many purposes, God allowed His to be sovereign.