From America (Home) to Site (Home) 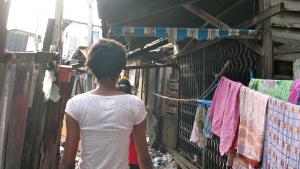 สวัสดีค่ะฉันชื่อลิซ! (Sawatdee Kha! Chan cheu Liz!) So, we finally made it to Bangkok, some of us taking a whole day including 10 hour layover. Walking in and out of planes, in and out of heat, allowed us to semi-prepare for what we thought was ahead. Many of us anticipated some mild heat, but the humidity came and our expressions were priceless! No longer in our own culture, we had to adjust to not understanding most of what was around us. That included language, culture, food, driving, and so many other things; yet in a way it felt like home because people smiled and always tried to help. Bangkok is a city, just like many of our homes, and we discovered that during orientation. We found food for lunch and went on a scavenger hunt, facing the reality of poverty in the cracks of wealth. I believe God is speaking into that reality here.

During orientation this first week, we combined with a team going to India and stayed at the Alliance Guest House. We started every morning with liturgical prayer and time in silence to be with our wonderful Father God. Personally that was one of my favorite times - having a conversation with the One who loves. He loves the world so deeply, and I believe that was experienced when we fasted in solidarity for the many people around the world who go to sleep hungry. That is just the tip of the iceberg of injustice in our world, but knowing God cares so purely and that we are invited to be a part of his army against injustice is empowering.

As a group, I believe we have been extremely challenged by the scripture studies we have done. We have come to many realizations about how it's not about what we do, it's about who we are and who God is. Who God is was a huge theme for our worship, and by the end of the week I could see in myself and others how much we had become jealous for God's glory. After we had prayed for and sent the India team we started orientation specific for our time in Bangkok. The most challenging part of that was language. The language is actually tonal, and for me as an English-speaking individual who cannot hear tones well, attempting to speak them feels impossible.

Sunday we found out our official sites, which range from elderly individuals to refugees, to preschoolers and moms, to what was once a leper community. So from here on out, you will hear from me at the site Khlong Toey, where we are working with children and moms in this community. We are driving there now and I'm ready for it to be my home... excited and expectant to see God work.