Give Me Your Eyes, Lord 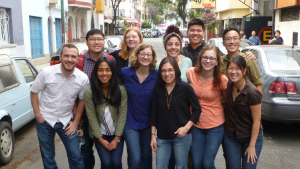 One of the reasons why I wanted to go on the Trek was because, when I was back home in the United States, I had been learning about how my relationship with God is intertwined with my relationship with others. However, after listening to what our guest speaker, Jean Luc, had to share with us today, I’ve learned that my relationship with God encompasses more than just loving my neighbor. It is also interwoven with caring for the environment in which I live, and the systems that I take part in.

To think that God only cares about individuals rather than mankind as a whole, would be to have an individualistic mindset. God, the creator of all things, doesn’t just care about bringing healing to our personal brokenness. Rather, God cares about the brokenness of the entire world—the brokenness within and between all people, surrounding environment, and even the systems within our society. John 3:16 says, “For God so loved the world that he gave his one and only son, that whoever believes in him shall not perish but have eternal life.” God loves the world in its entirety, and his mission is to restore all of his creation to what he intended it to be.

So, I’ve realized how I’ve had this individualistic mindset, and my prayer for this summer is that I would encounter God, similar to the Apostle Paul’s encounter with God. I hope that something like scales would fall from my eyes (Acts 9:18) so that I would see the world as God sees the world. Also, although this is my prayer for myself, this is my prayer for us all.  The lyrics of a song that we’ve been singing during orientation says, “Dame tus ojos, quiero ver.” Give me your eyes, Lord, I want to see.