God is One Because God is Three 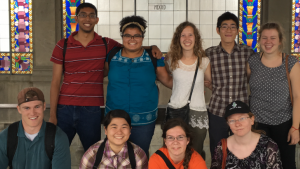 I remember watching one of the videos listed among the resources for the Global Urban Trek the week before departing and the speaker focuses in on the theme that “God is one because God is three.” It’s a concept that unity, especially in the Trinity, only exists through diversity; without diversity, unity cannot exist. I think of it as when you create a union of sets of Python (a programming game); if the elements are all the same, the set becomes one element. Diversity disappears because there is only one, and unity disappears because the one element does not have anything to be in union with. The Father, Son, and Holy Spirit all have different roles; but are one. Likewise, followers of Christ are diverse but are one in the body of Christ.

On the Trek, this concept of unity because of diversity is especially important because of the global nature of the Trek and the cultural immersion it requires. The Trek brings people together from across the United States (for the Mexico Trek: one from Pomona College, one from Gordon College, one from University of Wisconsin-Platteville, one from Brown University, and 5 from University of California-Davis, as well as our director from Duke & UNC), to grow, encourage, and acquire the Kingdom of God in slum communities around the world (Mexico, Thailand, North Africa, and South Asia). We all come from different tracks of life, stories, gifts, and vices, but we are also one team, one Trek, and one body of Christ. For myself, I see God the clearest in others, created in the image of God and truly transformed by the power of the Holy Spirit, within them, so when we shared our testimonies before splitting up to our sites, it was incredibly powerful and encouraging. We are a global people serving a global God and are one because we are different.

In Mexico, we’ve been immersing ourselves in the culture, learning more about the history of the country, the people, and the church so that when we arrive on site, we can enter in and be mutually converted. What being mutually converted means is that both parties learn something, hopefully about God. Where unity and diversity come into play is that when we come alongside our Mexican brothers and sisters in Christ, as different as we are culturally, language-wise, and socioeconomically, we are mutually encouraged. We are mutually encouraged because we were all wonderfully and fearfully made by God, and by entering into our global family under our global God, we see and experience that much more of the kingdom of God, which reflects so many more aspects of God’s character that we wouldn’t have known otherwise. This is such a beautiful truth, and it’s a way that the world may see God.

We’ve talked a lot about “green-lining” vs. “red-lining” when it comes to any cultural dissonance we may encounter during our time in Mexico as a way to celebrate and respect our differences with our hosts while at the same time maintaining unity. During orientation we learned a sing-song phrase, “It’s not wrong, it’s just different,” which invites us to enter in rather than dismiss the unfamiliar. One way this has come up has been during our many conversations about the Catholic Church and icons, as Mexico is 81% Catholic. Since most of us come from Protestant churches back in the United States, it’s really been cool to think about the beauty and purpose in many Catholic traditions, such as icons, that are so prevalent around Mexico. Icons, as our director explained to us, are kind of like portals that transport us to enter into a deeper encounter with God. It’s biblical and brings us closer to God, and just emphasizes the ways different churches can come together to have a closer and deeper experience with God.

As we depart to stay with our host families, all of us are truly excited to enter in and experience the culture and the wonderful diversity of the body of Christ, learning more about God in the process and growing in unity because true unity only exists through diversity.