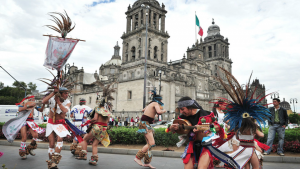 After touring the breathtaking Cathedral, exploring the general Zócalo area, and eating lunch, our team set out to find El Templo Mayor.

Since we did not have our cellphones or a map, a large part of getting directions was asking for help from those around us and it was surprising to see how quickly people we hadn’t asked would jump into the conversation to help us.

While we expected El Templo Mayor to be a grand building like the Cathedral, we were puzzled to find it located in between construction and away from the crowds of the town center.

El Templo Mayor is the old temple ruins of Tenochtitlan—the Aztec’s land before Spanish colonization. It is massive, yet faded and worn down. It would have sprawled throughout the Zócalo. We learned that the Cathedral had been built on top of the old temple using materials from the temple. As we walked back to the metro, we stopped to see a traditional Aztec dance and my thoughts began to swirl. The cultural dance before me was just a leftover scrap made up of what was once a strong civilization. Yet the religion I am thankful for did not see the beauty of this creation, and chose to demolish the city and force their religion upon the Aztecs. Restrained to a history book that skims over the atrocities of colonization and to being a side-show for tourists to watch, it is clear to see how the Aztecs were victims to a mindset of superiority.

As our team walked to the metro, we processed how easy it is for us to judge other religions with frivolous decorations but to swoon over the Cathedral. There is a deeply rooted idea that different and unique is inferior to the “norm.”

To this day, we are quick to label something as wrong if it contradicts what we know. “Us versus them” perspectives are prevalent in many conversations and are difficult to overcome.

After seeing the ruins right beside and underneath the Cathedral, our team was in a state of discomfort, but also knew that there was no easy fix. Change challenges us to intentionally change the way we approach differences and learn more about God’s heart for all cultures and people.

Revelation 7:9 discusses a “great multitude” from “every nation, tribe, people, and language” before the Lord. For this to be a reality, we must learn to appreciate the beauty of these differences, and I pray that God grows us all in this.