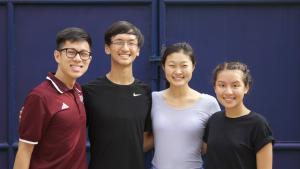 I got to spend the entire day with my host family for the first time today.

My Ate helped me do laundry this afternoon since I am still learning how to hand wash. After each rinse she dumped the tub of soapy water into the bathroom to clean the floor. All the bits of trash, hair, and dirt were washed down the drain. This method was effective in addition to reusing water and eliminating the effort it takes to scrub. When I went to use the bathroom later on, I was sad to see a dead cockroach in front of the toilet. The roof of the house rests on beams a few inches above the walls and there are cracks along the walls; there are ample ways for mice and roaches to get in, regardless of how clean the house is. The state of their house is a useful metaphor for understanding my family’s situation and the village as a whole. The root of their poverty isn’t the lack of food or access to healthcare, it’s a combination of deeper, structural issues, like the root of the cracks in the walls. They lack the time and money it would take to rebuild the house, so they do what they can - clean. Charity, like cleaning the bathroom floor, is much better than doing nothing at all. Missionaries come to what used to be a squatter village and gave my host family and their neighbors’ homes. Their lives are greatly improved, and they are eternally grateful, but they are still poor.

I’ve often heard the question, “How can you be poor but have a ___________?” I asked myself a similar question when I first saw my host family’s television. Initially, it seemed like a poor use of scarce resources. But after living here for a few weeks, other judgment calls my family has made are beginning to make sense. I’ve decided that I will never fully understand all the decisions my host family makes because their story is so different than mine. Their worldview has been shaped by so many experiences that I’ve never had, including, but certainly not limited to poverty. I may not understand how or why they own a television, but I observed what role it plays in their lives.

As soon as Joanie wakes up in the morning the TV is put on channel 4. Shows like Wonder Pets keep her still while my Ate does laundry and cooks. After making me eggs, Ate sat down with her to encourage her English skills while watching Dora. Dora taught me Tagalog that will help smooth out interactions for me in the village, but the English that Joanie practiced this morning is vital to her education. Our colonial footprint here includes textbooks written in English and the English language as default for important documents instead of Tagalog. Aside from practicing with me, Joanie sharpens her bilingual skills by watching television. At 12:30 Jonah came home from school and we watched Showtime. The man on screen sang a song we both knew and after one look at each other, we both joined in. When the show featured dancing I clapped along as Jonah and Joanie copied the moves and added a few of their own. The television brings music to the house; when there’s music I get to bond with them in a way that can transcend the language barrier. Even when I’m not there, music gives them a place to be joyful together. When my Ate gets the chance, she’ll watch TV dramas or the news when she’s not doing chores or watching Joanie. I played with Joanie for a few hours today and I was exhausted.

I can only imagine how tired she must be after three years of Joanie and fourteen years of being a stay at home mom. But taking a break isn’t an option for her. As I entertained Joanie this morning Ate forgot the pile of clothes beside her and got lost in the dream world on screen. I think that television is a much-needed change of scenery that is available whenever she is, for as long as she is. Back home, televisions have a reputation for killing brain cells and hindering interpersonal connection. While it is a source of rest for my Ate, it plays a role in making her a good mother rather than mothering her children for her. It teaches Joanie English and gives them music to bond over.

The love that I experienced in this house today (and everyday) is something I’ll never forget. There is still conflict; for example, Jonah gave her mother attitude and got slapped for it. I’ve never heard them say “I love you,” but the way they treat each other makes that very clear. My Kuya kisses his wife and daughters before he leaves each day and they greet him in the same way when he comes back home. When Jonah or Wren go out to buy a snack, they always buy extra for Joanie and me. Even though Wren shares much of his living space and his possessions with his little sisters, he came home early today and joined in the game they were playing. Family is a core value of this culture. The way they treat each other doesn’t seem to be out of obligation and it doesn’t depend on how their day was. The attitude is contagious-being around them makes me want to love them just as well.