Locked Out of Opportunity 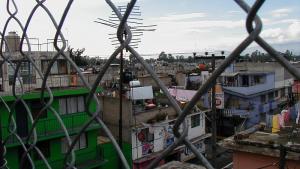 "As long as you work hard, you'll go far in life." This is pretty much the exact phrase that every parent and teacher would tell me when I was growing up. Born and raised in Silicon Valley, I was taught that hard work was the key to success, and this idea was ingrained in my mind. I believed that everyone deserved to be where they were in life. The poor were poor because they were lazy and didn't try hard enough, and the rich were rich because they were smart, diligent people. For almost 20 years, I believed this to be true. However, one day of getting to know my Mexican host parents has made me realize that class and character aren't always correlated with one another.

The story of my host father, Señor, begins about ten years ago when he worked for a construction company in the United States. Although Señor didn't have any documents that authorized him to live and work in the U.S., he was employed to help construct buildings-- making the frames, setting up the electricity, and painting the outsides. This was real, heavy-duty labor, and Señor would work about eighty hours a week - double the average amount of time the average American worked! Señor was helping the company thrive, and he himself seemed to be achieving upward mobility.

However, one car accident exposed Señor to the authorities, and he was deported back to Mexico. This is how I realized that hard work and success aren't always correlated with one another. If they were correlated, Señor should be a very rich man. In his book, The New Friars, Scott Bessenecker explains that "the question of a person's economic class isn't about the laziness of the poor...class and character are not always in a causal relationship" (31). Bessenecker furthers his discussion by explaining how economic pressure, infrastructural resources, and inaccessible systems push people into poverty.

This is what happened to Señor. He couldn't get any further in his life in the United States because he didn't have access to the government system. He was simply locked out of opportunity.

Therefore, I now realize that no one really deserves to be where they are in life. Some people just have more opportunities available to them while some people have none at all. Some people, like Señor, can work really hard but remain poor because there are forces and systems that won't allow them to come out of poverty.