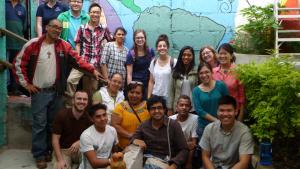 After a red eye flight, I have finally made it to Mexico City! The last 4 days have been an absolute whirlwind... it feels like we have been here for weeks. I feel so blessed to have the team and leaders that I do; they are incredible people, with diverse personalities, unique views of God, and are full of passion, willing to open their eyes and hearts to what it is that God has in store.

We have had so many experiences during our orientation time. We have learned about urban poverty, why the idea of incarnational ministry is so important and have begun to ask questions about how God is inviting us into that this summer.

Yesterday was our first exposure to just one of the issues that is so prevalent in Mexico: the issue of migration. During a morning session with some staff that work at Casa de los Amigos, the place we are staying during our orientation, we discussed how there are push and pull factors that cause people, or more accurately force them, to migrate. We dug into how factors of gang and drug violence, government oppression, poverty, and laws and regulations regarding migrants in receiving countries all contribute to an experience that is painful for those seeking a better life, only to be greeted by injustice.

During a visit to Tochan, a house in Mexico City that both cares for and fights for the rights of migrants from places like Guatemala, Honduras, El Salvador, and even Turkey, we were given the opportunity to hear the stories of migrants who were a part of this community. I don't think a single one of us left there without a sense of heaviness from what we had heard. There was a woman who, because of the violence in her community, had to flee El Salvador; she is stuck in Mexico without help from the government in granting her refugee status and unable to bring her 13 year old son with her. I watched desperation and sadness fill her eyes as she told us that all she wants is to see her family reunited. We heard the story of an 18 year old young man, who tried to make it to the U.S. in search of a life that was absent of government oppression, gang violence, and pressure to enter into drug trafficking; he is an individual who has grown up far too quickly and has seen far too much injustice for his 18 years.

Despite the weight of these precious stories, stories that not many get to hear, I found a glimmer of hope in Gaby. Gaby directs Tochan, and while she is just one person, she is determined to fight against the broken systems, political greed, and sin that have permeated the lives of these migrants. It was inspiring to see that, day after day, she has committed to standing up for those who no one else is fighting for.

How can we also stand alongside them? In our session today, I was reminded that I cannot limit God. I cannot look at the injustice around me and feel ill equipped or incapable of making a change. I am called to be a part of God's story, and he wants to equip me, giving his authority to be a part of the work in his story. God wants to redeem not just the individual, but all of creation. He wants to see healing and restoration not only in the lives of people like the migrants we met, but in the leaders of government that make the laws, in the systems that govern our society, and in our own cultural perspectives through which we view the world. He wants us to see that we cannot put him in a box. In putting him in a box, I limit the richness of my experience with him. I know that throughout the rest of this summer, I will hear more stories of injustice and brokenness like those I heard at Tochan. But I refuse to be blind to the ways that God is working. I am ready to have my eyes opened in new ways, to have my hands serve in new ways, and to have my heart molded to be more like that of Jesus. I am ready to be shown how he is calling me to stand beside those who Jesus is among, living a life reflecting who he is and the restoration he desires for our world.