The Realities of Our World 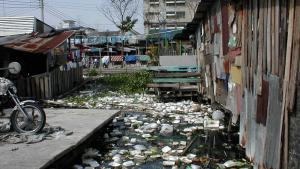 This past week was full of so many new things for those of us in Khlong Toey. We went from Khlong Toey to the Red Light District to caring for Yai to this past weekend for our mid-project retreat at the beach. It was a huge contrast. I asked the members of my team what their thoughts were between these contrasting realities in one society. Here is what they said:

It is as if I have been in four cities, not just one. In my mind, there is a city of rest and hope found in the churches, at Hang On, and with the children. There is a city of content and “normal life” found in our community at large and every one of our hosts is part of it. The third is the city of poverty represented in the sewage and trash that pollutes the water and in the loneliness and helplessness of Yai’s situation. The last city I have visited this summer is the city of pleasure found in expensive hotels, gorgeous beaches, and nice restaurants comes a thriving tourism industry seeking comfort. Four cities intertwined in one place, ironically called the City of Angels… -Becca

What strikes me most about Bangkok is how connected the rich and the poor are to each other even though they don’t know it. Yes, it’s the five star luxury hotel next to the run-down apartment building. Yes, it’s the corporate Starbucks with the hardworking Thai street vendor stationed right outside. But it’s also the generational brokenness of debt, prostitution and even Buddhist “karma” that oppress the poor and their families. There are entire slum communities of men, women, and children silently crying out for help and it often seems like Bangkok has turned a blind eye. I pray that our mighty and faithful God “Phra Jao” will relentlessly move in Bangkok until the broken-hearted ones are heard and redeemed. - Christine

The big factor that stick out to me is the lack of male role models in most people’s lives. All of our team’s host families and many of preschool children have this factor in common. We have learned that it is pretty easy for men to break away from families and have multiple wives/girlfriends so it becomes easy to run away from responsibility. Without male role models, mothers take on heavier burdens of caring for their children while working, and children don’t receive the fatherly affirmation they need which can result in children entering into prostitution or sons becoming ladyboys due to not wanting to become like their fathers. Pray for Thailand to raise strong male role models to reverse this trend that’s leaving so much destruction. -Ben

As you can see all have noticed a need for a healing redeeming God. The desperation of selfish desires leads to bigger malls (increasing the financial gap) and more prostitution (increasing the emotional brokenness). The desperation to survive leads to working in the Red Light District. The desperation of some leads to poverty like in Khlong Toey. To me, it is a cycle of desperation that only God can overcome. God brought beauty to this broken society, and He wants His children back. Let’s fight for His beloved children! Organizations are at work ministering in the Red Light District and we were so privileged to prayer walk with them. God has brought amazing individuals to save His children, but He’s not done yet. So, please keep these people and this cycle in prayer, because prayer is powerful and bring about change.