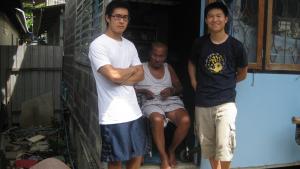 Enter: Matt and Roman into Soi 17.  Soi translates as street, but definitely not the type of street that you are thinking about.  In the slums, “street” can mean as little as a 3-4 foot wide concrete walkway raised precariously over the trash swamp.  Knowing that our host grandpa is crippled and has a wheelchair, the first thought that crosses my mind is, “This rickety walkway is definitely not ADA compliant.  I really hope I don’t drop grandpa into the swamp.”  As we step into the soi, a second thought crosses my mind: “So this is what swamp smells like. Thank God for olfactory fatigue.”  We walk to the end of the short, uneven soi past a few houses packed wall-to-wall like Lego bricks.  We knock on and open the door to the last house; then we step inside. Well, perhaps house is the wrong word.  Shack?  Room?  A third thought crosses my mind. “This is where I am living for the next month?”  We are greeted by a white-haired grandpa (Dta) who scoots on his hands and his bottom to greet us.  His face is crosshatched with wrinkles and his legs are as thin as my 11-year-old brother’s (but quite a bit longer).

Dta Boon-tam has a short conversation to us through Daniel (our Trek Director who can translate), tells us where to sleep (by the door on bamboo mats), and shows us the bathroom (a squatty potty by a faucet in the corner of the room half blocked by a 4-foot wall). The directors then take off leaving Roman and I to attempt relationship building without knowing much of the language. Yeah! Adventure time!

Aside from Dta Boon-tam, I am greeted by a spider with a legspan slightly smaller than my palm, some roaches (most of which are now squished), ants and flies (with whom I share my food unwillingly), some mosquitos (for whom I am their food), and a friendly cat that I have dubbed Khao Khaô (white rice).

You may have thought the rest of this blog post would be some emotional appeal for you to feel sorry for the poor because they have life so hard—that their physical comforts are so non-existent that you must feel guilty or donate money. Nope. Tricked you. This description is actually here so I could tell you it’s not that bad. It’s doable—even for you. Roman and I found out by Day 3 that the physical conditions are hardly the pain that the poor experience in the slums.

There is actually a lot of beauty here. From the 4-foot emerald monitor lizards snaking through the black water to the smoky charcoal hearth that we cook on outside the door. From the lush greenery growing out of the trash to the beauty of the children laughing as they play. This is Jesus’ creation too—but there is brokenness as well.

Roman and I quickly realized that the most painful element of poverty for Dta is the loneliness, a byproduct of society judgment of the poor’s value. Even though Roman and I could speak with each other, we felt the toll of minimal social contact. Imagine how much more for a grandpa who cannot even get out of the house himself. We felt the itch to go somewhere. To do something. Imagine that longing without working legs or a street that is ADA compliant.

In this discomfort, I am better able to understand Christ’s incarnation. I am better able to know in my head and my heart the love that Jesus lived. Jesus left so much more than an abstract heaven to be on earth with us. He left his perfect community with the Father and all the angels to sit with the spiritually crippled who could never get anywhere by themselves. Jesus gave up his freedom of omnipresence to be emotionally tied—and thus physically tied—to a people stuck in time and space. Jesus forsook his creative freedom and infinite self-expression so that he could interact with me.

As the days pass, I am better able to understand why Jesus chooses incarnation rather than coming in a heavenly empyrean of glory with an iridescent body descending as the military and political leader of the world. People are beginning to know Roman’s and my names (Glaa and Geng respectively). Relationships are forming (as far as they can with minimal conversation). We are becoming part of the community, expected to be at the grocery truck every day. Now, if I say Baan (home) people know I am going to Dta Boon-tam’s house, not back to America. I am interacting with people who have faces and problems and stories—people. Whether I am living in a house or a shack or a corrugated metal room, this place is baan for the summer.

Doesn’t that make you love Jesus so much more? Jesus left power, comfort, cleanliness, freedom and community, because he is desperately in love with you. Jesus crossed more social norms than a Californian college student living in the slums just to try to woo you. Jesus traveled much farther than a 20-hour plane flight just so you could see his face and know his name. Not YHWH, the name that we cannot say or pronounce, but the name Jesus.

It makes sense. How can I not respond with the same love with which I was loved? Living in the trash swamps is not some grand, noble mission for the sake of hundreds of souls—no, I am learning that this is only a reaction to the love with which I am loved.